An island paradise, a marooned shipmate, and over four years of extreme solitude.

Welcome to season one, episode five of Nonfiction Friday the series where I share unbelievable stories that really happened. In today’s episode we’ll be talking about a real life Robinson Crusoe and his years spent alone before rescue.

It’s September in 1704 and pirate Alexander Selkirk gets in a disagreement with his ship’s captain. The only way to solve this disagreement, he thinks, is to be willingly left on an island. So stubborn is he that he thinks he would rather tackle the island then deal another minute with the ship’s captain. The captain, having no wish to further torture himself with Alexander’s company, agrees and Alexander is left on an island with several items: his clothes bedding, gunpowder, a gun, bullets, tobacco, a hatchet knife, his Bible, and his mathematical instruments and books.

I believe he may have started this journey feeling overly confident. The first eight months were actually extremely difficult for Alexander. He felt he had to work very hard to keep the melancholy at bay. He had little interest in eating and he would fight off sleeping for as long as possible each night. He spent his days in worry. He may have regretted his rash decision, but he knew after a while that he just had to make the best of it because, clearly, he was going to be there for a while.

And so, he started about making two structures. They were essentially huts constructed from pimento trees. He covered them with grass and aligned to the insides the skins of goats that he had killed on the island. In one he prepared his food and the other he slept, read, prayed, sang songs. He would later say that he was so good of a Christian while in solitude on this island that he feared he would never be so good a Christian again.

He may have gone on this island with supplies, but supplies only last so long. He knew he needed to save his gunpowder for his gun so that he could continue to get meat easily. So he learned to make fire by rubbing sticks together. He lived mostly on crawfish, which he claimed were as big as lobsters and tasted even better, and the goats which inhabited the island. He estimates he killed over 500 goats in his years there and also that he caught as many more which he would then mark on the ear and let go. Two of his supplies were due to run out quicker than others. That was powder and shoes.

When he ran out of powder, he was forced to learn how to take the goats down on foot and his shoes could only keep up with this for so long. Living this way made him fast and swift and strong. His feet became so tough and calloused that after he was rescued it would be quite some time before he could wear shoes again. Every time he put them on his feet would swell.

After a time the melancholy of being stuck on this island seemed to pass and he started to enjoy himself. He would like to carve his name into trees or he would make clothes out of goats skins and a nail that he had found.

In addition to goats, there were also a large number of cats and rats on the island left there by ships that had occasionally come to port. The rats became a real problem for Alexander. They would never let him rest and ate his close as he slept. They were a real nuisance for him around camp. So what he should do about this he quickly figured out. There were so many cats that he decided he would start to befriend them and tame them. They would become so tame they would lie about with him by the hundreds. So, I just want you to imagine a man in 1705 or six or whatever year this is, but he’s stuck on this island. He has two huts made from pimento trees. He’s wearing clothes made of goat skins and he is surrounded by teams of cats who just hang out with him all the time. Sounds like a strange dream.

He soon graduated from just taming cats and started taming goat kids as well. They would sing and dance and play together and they were quite good company for this sole man on an island.

He was there so long his knife wore to the back and he was forced to make a new one. Luckily, he had found some iron hoops left on the beach. So he actually managed to heat those up and pound them down using rocks, polishing them on rocks until he had some formation of a blade once again.

He did see the occasional ship pass by over the years and some actually came to shore. You would think that he would be quite excited by this as it would be his ticket out. But to his immense displeasure they were both Spanish ships. He feared that he would not be rescued by the Spaniards, but would instead either be killed or sold into slavery.

One of these ships he could not tell who it was until he got close. Unfortunately, he was spotted before he could determine who they were. They actually shot at him and chased him through the trees where he managed to climb one and stayed for hours while the crew below him wandered about looking for him. Two of the crew men actually stopped to relieve themselves at the base of the tree in which he was hiding. He waited them out, watched them kill a few goats, and once they left he climbed down and continued on living as he had.

Four and a half years passed before Selkirk spotted a ship that he knew was English and so he lit a signal fire. The ship luckily came to shore. The crew spent some time with him on the island witnessing how he lived. They even had a goat hunting expedition with him.

The ship sent its nimblest runners and a bulldog to help capture the goats. Selkirk outran them all. Then he came back carrying the goats on his back as if it was just a normal everyday occurrence.

When he first came aboard the ship that would be his rescue he was so out of practice with speaking words and talking to other human beings that his words kind of came out half formed and people had a hard time understanding him. They even offered him a dram, some alcohol to ease his confusion and probably celebrate his rescue. He absolutely refused it, being afraid to have anything other than water—the only thing he had had to drink for the last four and a half years.

You may think that now he’s been rescued he can just make his way home, but it’s actually another two years that Selkirk lives and works on his rescue vessel before he ever makes it back to his home country. It wasn’t too long after Selkirk returned that the book Robinson Crusoe was published. To this day people still debate over whether or not Selkirk was an inspiration to the author. Some say yes, some say no, but no one can ever fully know the validity of these claims except for the author himself.

If you’re curious about this story and want to read a first-hand account, you can check out the book Eyewitness To History by John Carey. This book is a collection of a variety of stories across the centuries, all real accounts by real people in history. It’s a fascinating book, one of my favorites in my entire collection. And, finally, if you liked this video, give it a quick thumbs up and tune in next Friday for Episode Six.

The first season of nonfiction Friday will be eight episodes long and it is experimental. So, if you liked this video and you want to see more be sure to let me know in the comments so I can decide if I want to start making a season two. If you’re new here and you haven’t subscribed yet, go ahead, press that subscribe button and I will see you on the next one. Thanks for watching. Bye, guys.

About the Source for this Episode

This episode of Nonfiction Friday was based on the eyewitness account in the form of a diary entry from one of the crewmen on Alexander Selkirk’s rescue ship, as found in John Carey’s book, Eyewitness to History. 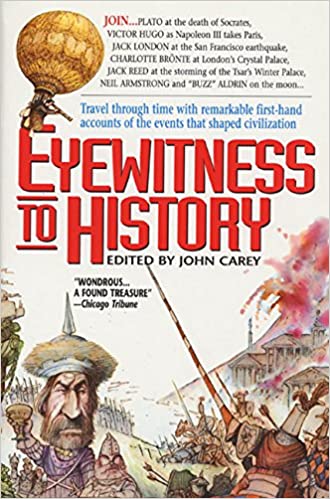 Civilization's most momentous events come vibrantly alive in this magnificent collection of over three hundred eyewitness accounts spanning twenty-four turbulent centuries -- remarkable recollections of battles, atrocities, disasters, coronations, assassinations and discoveries that shaped the course of history, all related in vivid detail by observers on the scene.

Civilization’s most momentous events come vibrantly alive in this magnificent collection of over three hundred eyewitness accounts spanning twenty-four turbulent centuries — remarkable recollections of battles, atrocities, disasters, coronations, assassinations and discoveries that shaped the course of history, all related in vivid detail by observers on the scene.

Note: This book is becoming more rare. At the time of this posting only 76 physical copies remain on Amazon and no ebook or audiobook versions are available.

Preview
Disclosure of Material Connection: Some of the links in the page above are "affiliate links." This means if you click on the link and purchase the item, I will receive an affiliate commission. I am disclosing this in accordance with the Federal Trade Commission's 16 CFR, Part 255: "Guides Concerning the Use of Endorsements and Testimonials in Advertising."

Other features in the Nonfiction Friday series:

The Georgia Tann Adoption Scandal
The Dyatlov Pass Incident: An Unsolved Mystery of the USSR