I search out the latest Stranger Things merch like any other fan who has fallen in love with the Netflix franchise. The Duffer Brothers created a unique blend of nostalgia and modernity, a combination that has entranced many dedicated viewers worldwide.

I learned that Random House and Netflix are working to create a series of novels built in correlation with the television franchise. The novels would expand the Stranger Things universe by sharing backstories, histories, and showcasing various characters. The first book promised to chronicle the story of Eleven’s mother, Terry, as she joined the MKULTRA experiments in 1969. It was written by YA author Gwenda Bond and titled Suspicious Minds.

Needless to say, I wanted a copy to read and review for myself. I, like so many fans, am eagerly awaiting the July 4th release of Stranger Things Season Three. I hoped this novel would keep my mind occupied in the meantime.

Unfortunately, I was very disappointed.

I felt so discontented by the end of this book and possessed so many thoughts about its execution that I felt compelled to express myself in a full-fledged (and painfully honest) book review on my YouTube channel. Press play on the embedded video above to hear the details.

What To Read Instead

I can’t recommend the Suspicious Minds book to any fellow Stranger Things fan. However, if you are looking for a Stranger Things book to read I do have a replacement recommendation for you. Try the beautifully made behind-the-scenes companion guide, designed by Melcher Media. It is a coffee-table sized book that will give you more information on the conception of Stranger Things. Plus, details on how the show itself was eventually made. It houses character details, set descriptions, and thoughtful sections written by the Duffer brothers. 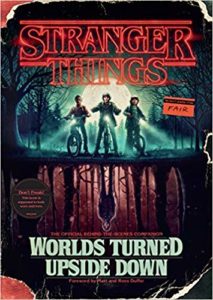 Note: Both Suspicious Minds and The Official Behind-the-Scenes Companion were gifted to me for free from Random House and Del Rey, respectively, in exchange for my honest reviews.

I hope you’ll be tuning in for season three of Stranger Things on July 4th alongside me. I will be shutting myself indoors and not talking to another soul until I have successfully binged the entire season.

Have thoughts on the new Stranger Things books? Drop a comment below. Let’s chat!