You are here: Home » Books and Reading » 10 Interesting Facts About Ray Bradbury | Author of Fahrenheit 451

Every month in 2019 I research a different author and share the most interesting facts I find in a blog post. Each author biography blog post is accompanied by a more detailed video with complete stories.

February’s featured author is the legendary Sci-Fi/Fantasy writer Ray Bradbury who composed highly-praised works like Fahrenheit 451, Something Wicked This Way Comes, The Martian Chronicles, as well as hundreds of short stories.

My hope is that you’ll find something in this list that sparks your interest, something that will further connect you to the legacy of a writer who inspired the imagination of millions of readers.

Ray Bradbury was the quintessential boy nerd: somewhat isolated, dangerously near-sighted, interested in books, movies, and visiting the library above all else. He got his love of movies from his mother and his love of books from his father. Ray was nicknamed Shorty and had an athletic older brother nicknamed Skip. They all encouraged his young, creative mind and would help fuel the creative genius to come.

Ray Bradbury failed his language proficiency exam in eleventh grade and had to take a remedial grammar class his senior year. This incident speaks volumes of Bradbury’s interests and talent. He was a very dedicated young man who wrote early and often, but one who didn’t necessarily focus on his school smarts. After Ray’s high school graduation ceremony he realized, “there was a vast plateau of nothing waiting for me.” Ray knew it would be up to him to make his dream of being a writer a reality and so he set out with a new fervor.

As a young man from a middle-class family during the great depression, Ray did not have the option to pay for university. Instead of a college degree, Bradbury went to the library three days a week for ten years. Bradbury tried a variety of different odd jobs after high school, but settled on working at a newsstand. This was a job he would hold for the next four years because it gave him time to right in the empty hours of mid-morning and mid-afternoon. This strategy would pay off. By the end of his first summer after high school Bradbury would have already completed fifteen drafts.

Bradbury had an aversion to cars. This was likely started after he witnessed a car accident that killed six passengers. A car accident is grisly in any circumstances. Yet, this was in the 1930’s/early 1940’s when cars did not have the safety features they have today. It is reported that Ray was so shaken by seeing this terrible crash that on his walk home he clung to buildings and leaned against trees as he went, unsteady on his feet.

5. Ray Bradbury met his wife in a bookstore

It was an early spring day in Los Angeles when Ray Bradbury entered a small bookstore. He was wearing a trench coat with big pockets and carrying an even larger satchel. The store had recently had a theft, so the store clerk worried this strangely dressed young man would be up to similar tricks. She confronted the young man. Bradbury had to prove his innocence by showing he was a writer. He pointed to a store copy of an anthology and showed the store clerk his work inside. The store clerk was Maggie McClure, the woman who would eventually become Ray Bradbury’s wife. Their talk at the bookstore turned into cocktails and then dinner, the start of a whirlwind romance that would have them engaged not two months later at the end of June. Maggie was the first and only girl Bradbury ever dated. Through the mutual love of literature which first bonded them together, Ray and Maggie would have over fifty years together. A lifetime of love and friendship resulted in four beautiful daughters and eight grandchildren. 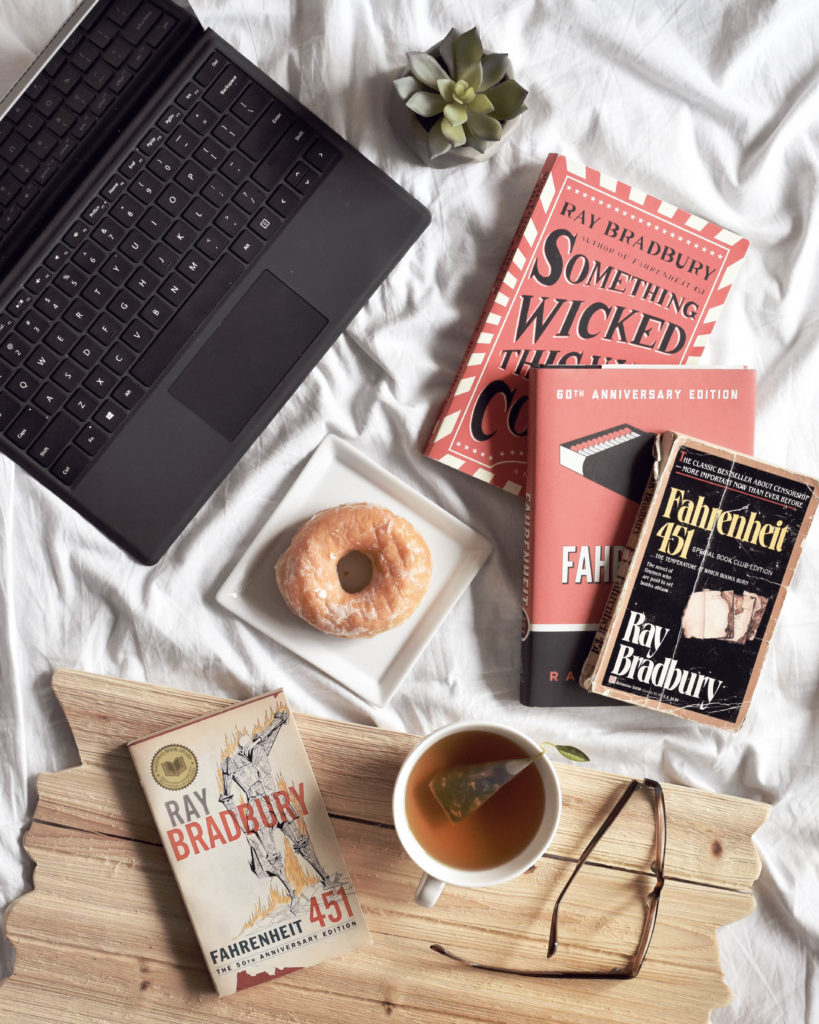 6. A trip to Mexico Heavily Influenced His Work

For many years, Bradbury earned his income from the sale of his short stories to fanzines. He was a self-educated writer and had numerous writing friends who served as mentors during the start of his career. Many of those mentors and friends recommended that Ray get his head out of the books a bit and see the world. Ray sold three stories in quick succession, receiving $975 as a result. This was more money than Ray had ever seen. For the first time he had the opportunity to travel. It just so happened that a friend named Beach was going on a trip to Mexico and needed a companion.

Ray Bradbury was heavily inspired by the tenacity of the Mexican people, the landscape, and the culture. He saw many things that would later make their way into his fiction, a dark-haired girl playing a blue piano in a window, a woman carrying to burning trays of charcoal along the city streets. He also traveled to the catacombs of Guanajuato and was so shocked by the sight of mummified bodies that he had to be led back out. Wooden masks from a local craftsman there would eventually be featured on the cover of his work Dark Carnival.

7. A betrayal from a friend almost ruined his career

In 1946 Ray Bradbury was offered an incredible opportunity. Martha Foley wanted to include Ray’s short story in her upcoming anthology. This feature could catapult Bradbury’s career into further success. However, Bradbury was not even aware the offer had been made. The same man that Ray had traveled to Mexico with, Beach, had intercepted Martha’s telegram and responded, pretending to be Ray and declining the offer. This was not the only mail that Beach had tampered with. Beach, perhaps in a fit of creative jealousy, had been intercepting phone calls, letters, and telegrams as they came into the tenement offices where they both held studio spaces. Bradbury was tipped off by a mutual friend in the industry, who Martha alerted after Bradbury declined her offer of publication. Bradbury confronted Beach who confessed to everything.

8. Fahrenheit 451 was written in the basement of a library

At the time Bradbury’s most famous work was written he and Maggie had two daughters. Too poor to afford an office, and it being too loud to work in his home, Bradbury once again went to the library to find an answer. He heard a mechanical clacking and discovered that in the basement of the UCLA library you could rent a typewriter for 10¢ every half hour. It was here, surrounding by books, that Bradbury wrote one of the most influential works against censorship for $9.80.

9. He was asked to change his name for print

The publishing industry wanted to make Bradbury’s name more exciting for print. They tried a few options, like Douglas Bradbury and R.D. Bradbury, but in the end Ray decided, “I guess I’m too darn used to just plain Ray Bradbury.” With that, the name stuck.

10. A Piece of Mars is Named After Him

The science team for the Mars rover Curiosity honored Bradbury in August 2012, shortly after his passing, by naming the rover landing site in his legacy as Bradbury Landing. NASA scientist Michael Meyer was quoted as saying, “This was not a difficult choice for the science team. Many of us and millions of other readers were inspired in our lives by stories Ray Bradbury wrote to dream of the possibility of Mars.”

Which fact surprised you most? 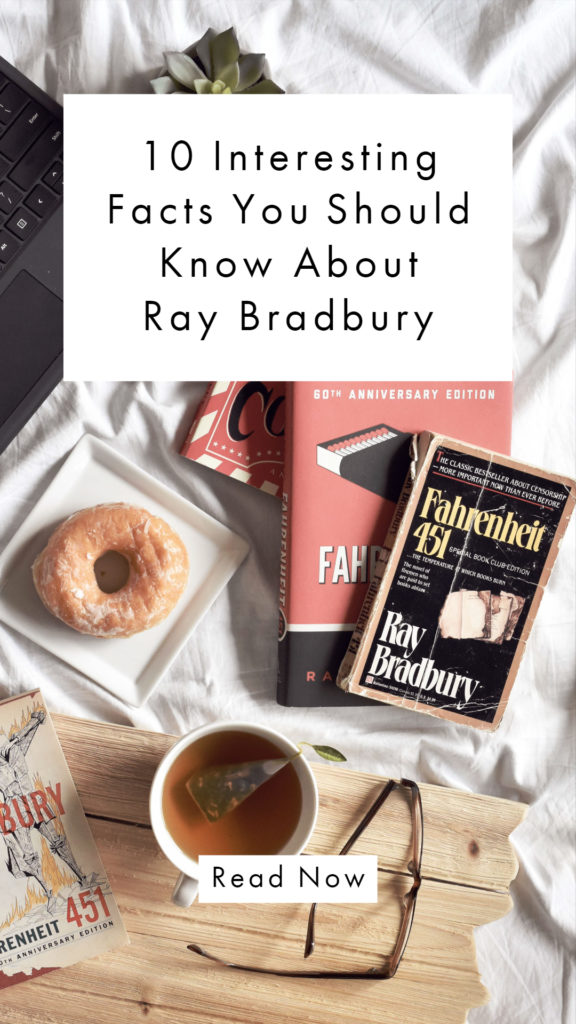